The sisters, with no other family members, named each other the beneficiary of their estates. (Picture credit: cfneia.academicworks.com)

A former library director has left an $8 million gift to Livingston County Library in Chillicothe, the place where she worked for 10 years.

In a manner reflective of the quiet, private life she lived, the Livingston County Library Board of Directors declined to reveal the dollar amount when announcing the memorial contribution of Lillian DesMarias on Thursday. Papers filed with Livingston County Circuit Court, however, reveal that the gift exceeds $8 million.

As a result of the donation, the library board voted to establish the Livingston County Library Charitable Trust with funds going to support library services and programs beyond the capacity of county funding.

At this point, she and the board are gathering information to help determine where the money should be spent.

With a typical annual budget of $500,000, funded primarily through local property taxes, this new funding creates what Westphal described as “tempered enthusiasm.” “There are so many possibilities,” she said. “Right now, we are in the exploration phase, looking at other libraries that operate with large budgets. We want to be doing things that are going to benefit our patrons and not be frivolous.” The memorial contribution is not to be used for salaries or general day-to-day operating expenses of the library. All excess memorial funds not being used for expansion and improvement purposes are to be kept separate, invested and reinvested by the board, and the net income there from added to the memorial fund, all of which is to be used as set forth as directed by the board of trustees. With a 3 percent return on investments, the principal amount would generate around $240,000 annually.

Westphal said a strong board in place will ensure money is spent wisely. Initial voting members of the Livingston County Library Charitable Trust are Marion Harter, Inger Young, Lindy Chapman, Margaret Vance, Betty Sue Radcliff, Jennifer Lovell and Matt Wenzel. Library Director Westphal will be one of two non-voting members. The other is to be a corporate fiduciary selected by the Board of Trustees.

A traveling book mobile equipped with Wi-Fi, an expanded computer lab, more computer classes and more laptop computers, in addition to more electronic books, magazines and movies are all suggestions being considered.

Lillian DesMarias was born in Grundy Center, Iowa, and served as library director from 1970 until 1980. She died on Nov. 24, 2012, at the age of 99, in Grundy Center, Iowa. She had no family members at the time of her death, having lost her sister, Dr. Virina DesMarias, in 2009. The sisters, with no other family members, named each other the beneficiary of their estates.

Virina DesMarias was one of Iowa’s first medical doctors. She graduated from Grundy Center High School in 1933 and from the University of Iowa College of Medicine in 1940. She practiced medicine in Grundy Center until her retirement in 1991. The bequest is the combination of both Virina and Lillian’s trust.

Before coming to Chillicothe, Lillian DesMarias had been administrative librarian of the Northeast Missouri Library service, a regional library serving Clark, Knox, Lewis, and Schuyler counties and based at Kahoka. She had also been administrative librarian of the Little Dixie Regional Library at Moberly, and had also worked for the Missouri State Library and the Boonslick Regional Library in Sedalia.

She began as Livingston County librarian in March 1970 with the philosophy that libraries play “an important part in the community,” according to a newspaper article printed in the Constitution-Tribune.

During her tenure, the library had taken additional steps toward improving services to the public, including the installation of an elevator and a ramp on the north side of the library building, and remodeling of the front entranceway.

DesMarias initiated the move of the children’s department to the building’s lower level, a move that required her own bricklaying skills, and cataloging of the George Somerville collection on the second floor. She was credited for maintaining an up-to-date, highly-rated adult book collection and that so doing required many hours of patient attention.

“Whatever the task, ingenuity and persistence have been her hallmark,” the library board stated at the time of her retirement.

In 1976, DesMarias was named vice chairman of the advisory board of the Northwest Missouri Regional Library Development Association.

DesMarias was the editor of the Livingston County History book, “Celebrating 150 Years from 1831 to 1981,” a 348-page book published by the Retired Senior Volunteer Program in 1981.

While in Chillicothe, DesMarias resided at 303 Hillcrest.

“Ms. DesMarias was very progressive during her time as library director,” said Westphal said. “She believed that a library played an important role in an educated, successful community. She felt very fondly about her time at the Livingston County Library and had a great impact on the mission and goals of the Library then and today.” The Livingston County Library Trust was established to accept donations and allocate funds to the library for additional programs, materials, services and future capital projects. The DesMarias donation, and any others to follow, will be used exclusively for library endeavors.

“The Livingston County Library Board of Directors gratefully accepts the generous and selfless gift to our community,” said Library Board President Marion Harter. “Ms. DesMarias lived a life devoted to learning through her personal interests and dedication to her profession. It will be an honor for the Livingston County Library Trust Officers to carry on the lifework of Ms. DesMarias and those who follow through their gifts.” Westphal, who has served as library director since 2005, recalled how DesMarias was pleased to have seen voter support for the library’s $3.4 million restoration project. In corresponding with Westphal, DesMarias talked about the building and how much she had loved the building.

“She knew there were things that needed to be done,” Westphal said. “She loved the location of the library and thought it was important that the building remain in downtown Chillicothe. She was so pleased that the community so overwhelmingly supported the renovation of the building.”

The Livingston County Library will be hosting its annual Mini Christmas Tree decorating contest. Get creative and bring in your decorated mini Christmas tree from

Join us Thursday, December 1st at either noon or 6 pm to create a spectacular winter wonderland display. All supplies provided. Registration has been extended 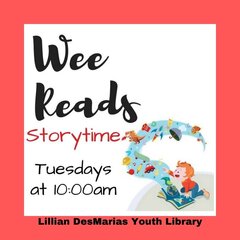